This is the second part in a multi part series about building a garden area and growing our own food and flowers. The first part is here. In the first part, we spent months ripping up the old garden tangle that was present and clearing the area for new raised beds.

Once the space was cleared for raised beds, I had to actually get raised beds. Before I could buy raised beds, I had to figure out what my garden should look like. I made a few designs but only two were real contenders. I made my designs in a spreadsheet and each box constituted a 1×1 square foot space. Black would be garden space. Green showed where the lawn starts. White was existing plants or walkways.

The first design looked cool because it was unique. It had a pathway effect that felt like it would be enjoyable to walk through during spring and summer.

The second design was organized into streets and avenues. It’s functional for working and will be easy for walking through with the wheelbarrow. 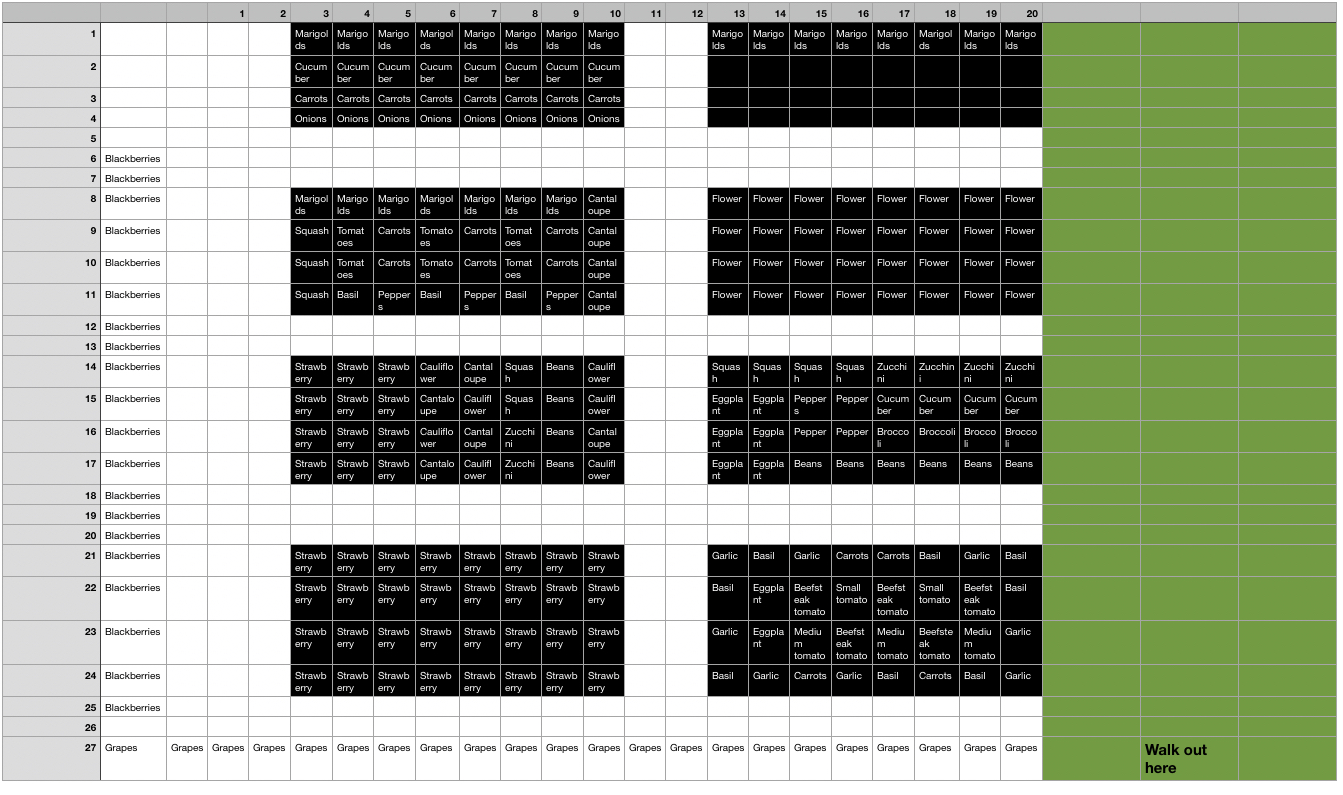 Once I had a design, I shopped around for raised bed kits at Home Depot, Lowe’s, Amazon, and a few other retailers. There were even a few nice options for kits. This one was 4×4 and I could have done my design with 16 of them. This one was 4×8 and I could have done my design with just 8. I just didn’t fall in love with either because I wanted to have raised beds that were at least 20 inches high. In fact, the major problem I encountered for raised beds was that anything that met my length and width dimensions was usually less than half my height dimensions. I found some custom products online that could be made to fit my criteria, but those would have cost upwards of $250 per raised bed. If you don’t mind your raised bed being shorter, a kit is a great option. If you want a tall bed at a reasonable price, explore DIY like I did. If money is no object, you can basically buy anything.

I decided to explore building my own homemade raised beds using lumber so I could get what I wanted without spending $2000 on 8 raised beds. However, Mrs. Up vetoed me using a power saw because of something about me being very clumsy and cutting fingers off (in fairness to her, she’s probably right not to want her husband to suddenly have fewer fingers just so he could save a few bucks on raised garden beds).

I did some research on materials and determined that untreated wood was the best choice for a raised bed since I wanted to grow vegetables and fruit. Cedar would have been ideal for wood, but I went with Douglas Fir because Cedar was difficult to source in the dimensions I wanted. I found out that the Lowe’s and the Home Depot near me would cut any boards with a thickness of 2 inches or less so that I wouldn’t need to fool around with a saw. However, that would mean that I couldn’t use 4×4 posts at the corners. (Not having my own saw has some draw backs because 4×4 posts at the corners would have been ideal). Ultimately, I’d have to use 2×4 boards to secure the corners of the raised beds. 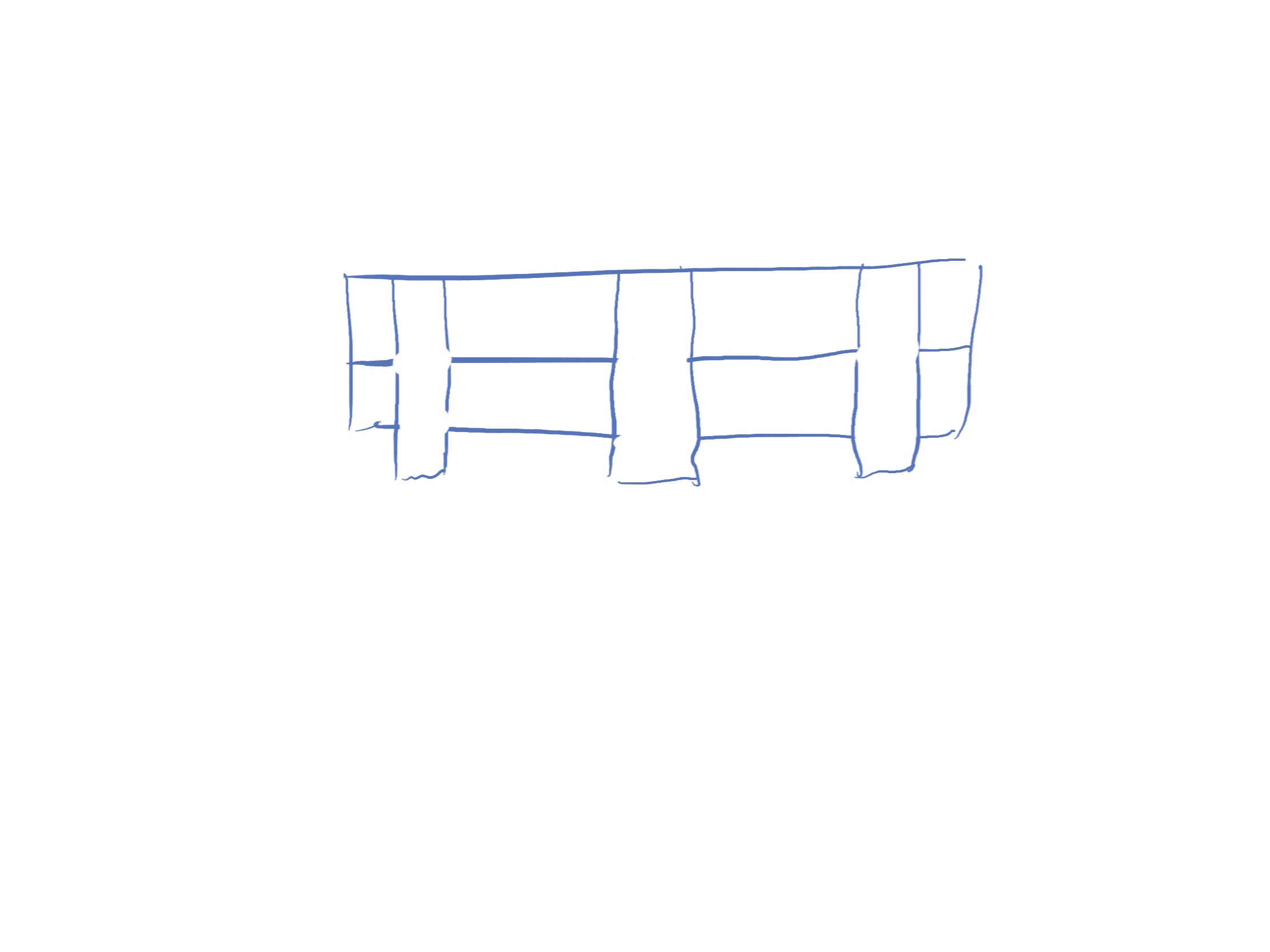 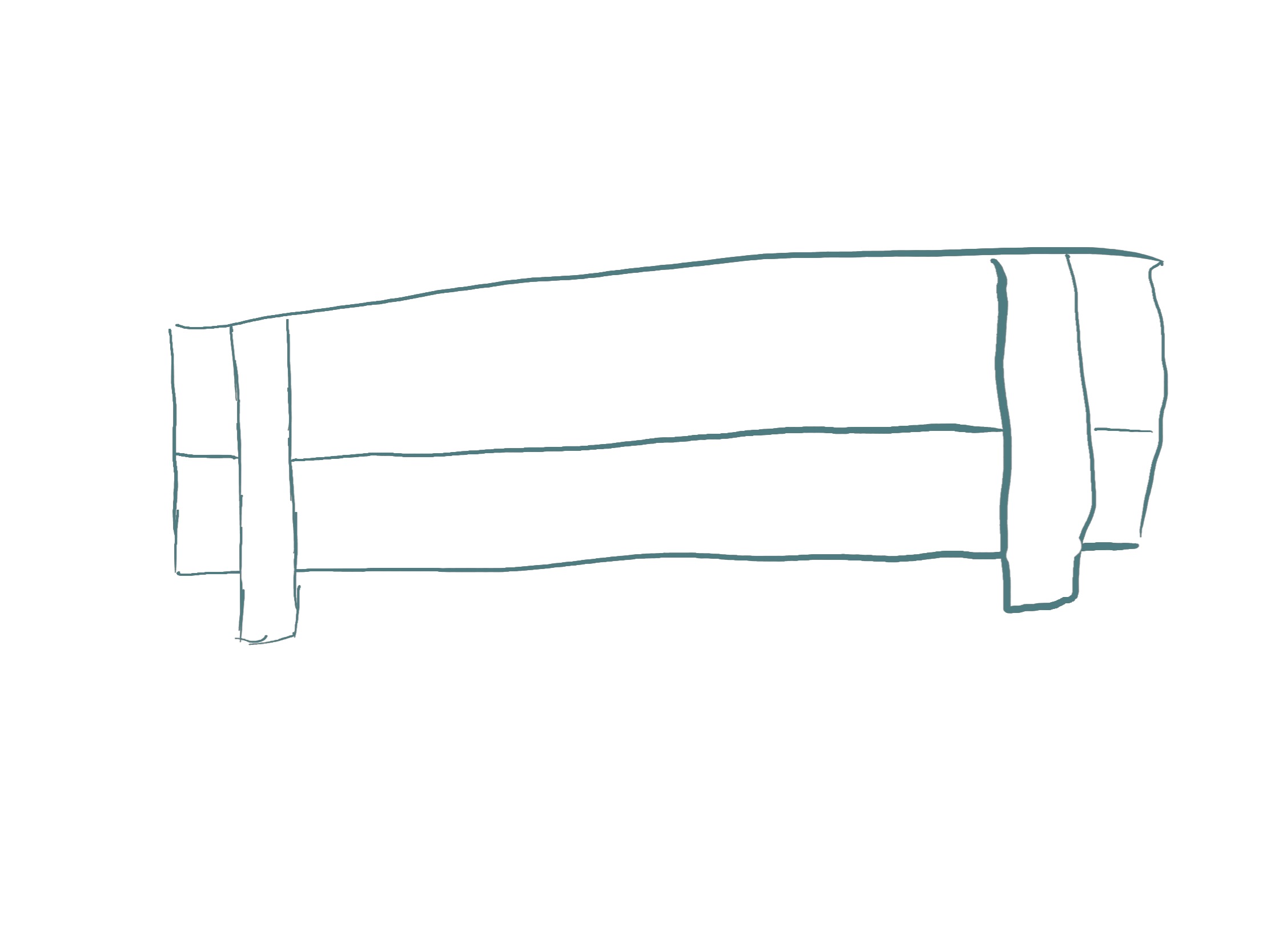 With this setup, I basically designed my own kits that HomeDepot would deliver to my house and which I could assemble an entire raised bed using only my trusty cordless drill and a whole bunch of screws. FYI, HomeDepot and Lowe’s will both deliver bulk orders of lumber to you for a fee if you don’t have a vehicle capable of hauling lumber. It’s like $65 per delivery so try to get everything delivered at once.

I ordered my lumber and assembled my homemade no saw needed kits. You can see how they were put together in these pictures from the location of the screws and the boards. 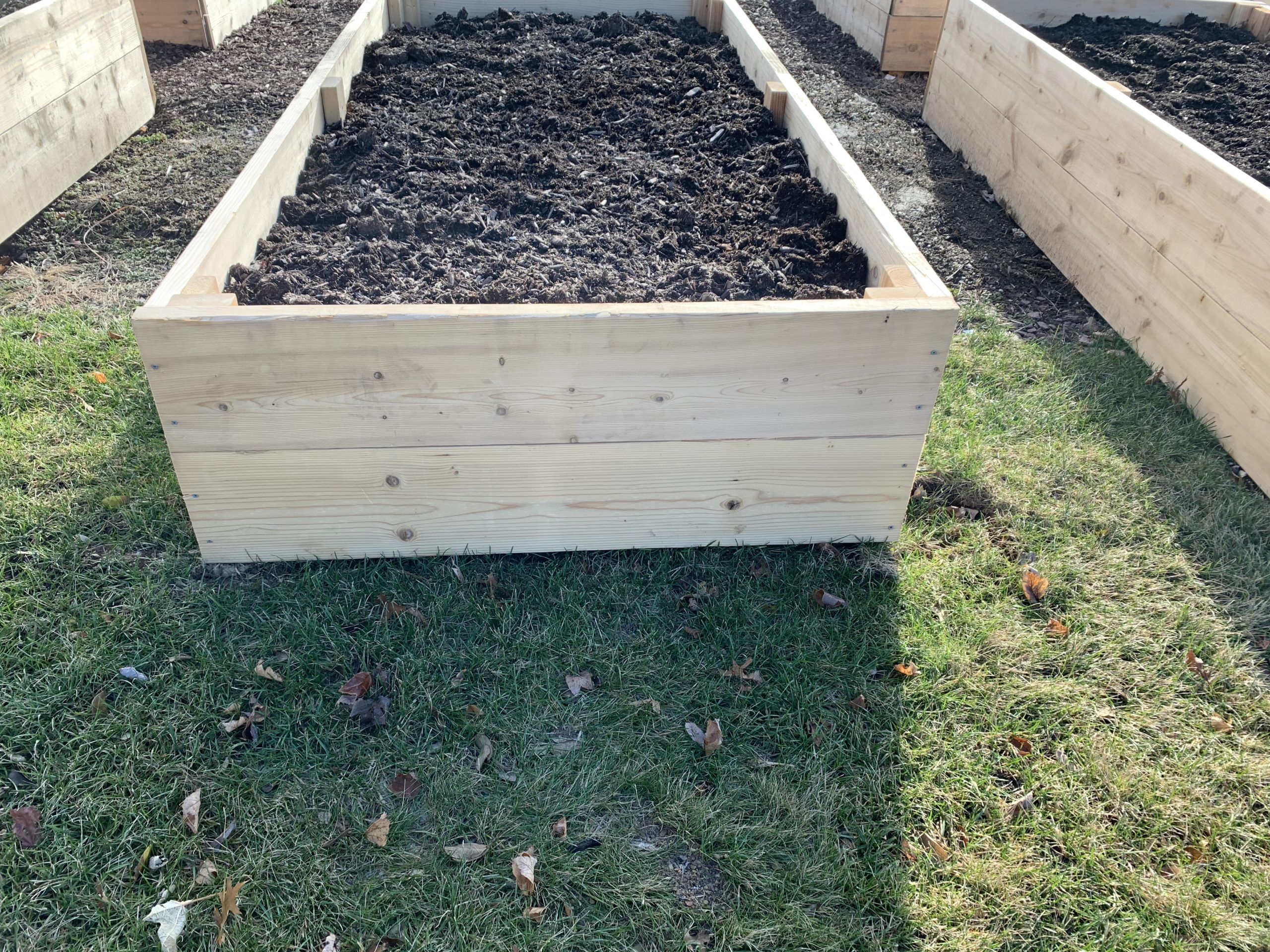 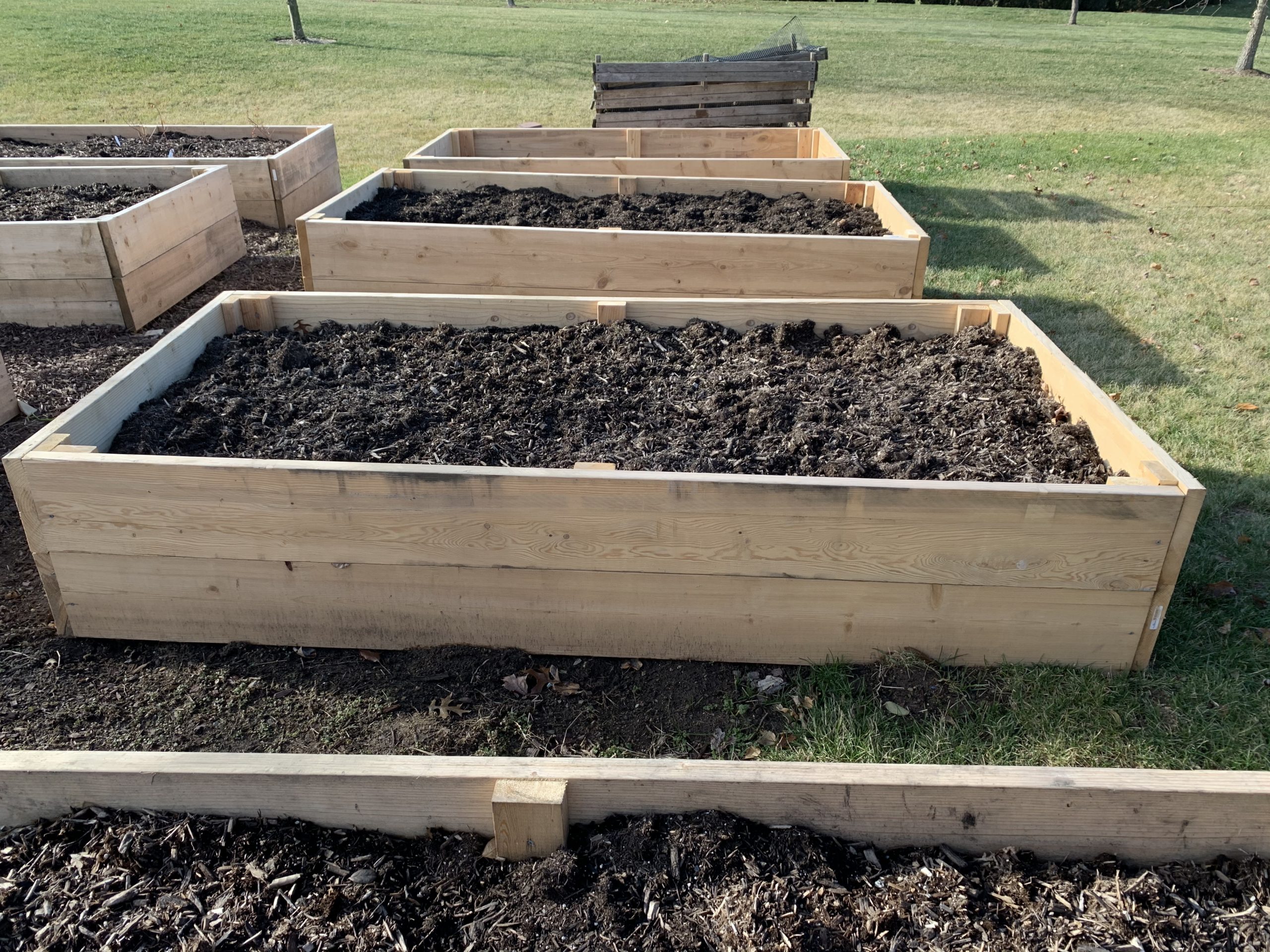 It was basically a matter of putting one together at a time and moving them into place. Moving these around was a two person job. They’re a bit too heavy for Mrs. Up to carry one side.

The day all 8 raised beds were complete was an exciting day. It cost me about as much as two custom raised beds to build 8 from pre cut lumber. I basically saved $1500 by doing it myself. I then squandered that savings in the subsequent steps.

2 thoughts on “Grow and build your own… Part 2”